Raffaella Darelli (Ya Ya), from Michael

I spent most of my weekends as a child with my grandparents; we are of Irish-Norwegian and Italian descent.

My cousins and I would be playing and laughing always. Our great Aunt Raffaella Darelli told me endless stories about Lassie the dog. Raffaella (Ya Ya) and I would play using props and a box, recreating the TV show.
Raffaella was my favorite person in the whole world.
She passed away in the later 1970’s. Her husband Michael Darelli was an Italian born Downtown NYC bootlegger who died in the 1930’s. Michael Darelli had a gold and diamond ring with the initials MD that was gifted to me by Raffaella before her death, as I was her very dear pet nephew. Coincidentally Michael Darelli and I had the same initials.
In the very early eighties I lost the ring and then moved to a different state and residence. In the early 90’s
a woman called me to ask if I had lost a ring and that I please describe it to her. This angel of a person also happened to have the initials of MD as well!
She was living in my former house and was in the midst of having work done there.
While workmen were digging around the front entrance patio they found the ring that I had lost buried in 6 inches of soil for more than twenty years and gave it to her. She then tracked me down through former neighbors of ours from this old neighborhood. As they say, the rest is now history.
I have been wearing this ring ever since and will never ever remove it again. 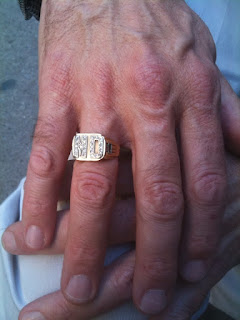