I’m in Louisville, KY at my grandmother Bebe’s house. We watched the late-night news together on her bed and she scratched my back, after I requested it, though not as hard as I begged her to.
I already said goodnight a little while ago when I brought our two ice cream bowls back down to the kitchen.  But now I’m in the doorway of Bebe’s bedroom to tell her something.
Bebe is, as always, on her side of the bed, which sags a bit extra from the sad habit of widowhood.  She is in her sleeveless, flowered synthetic nightgown, the kind that just hangs from the shoulders, with two seams, one up each side and no shape at all around the middle. I can see a crescent of breast on her side when she lifts her arms to lotion up her pink-nailed hands.
Maybe I have come back in to remind Bebe that I might go for a run in Cherokee Park in the morning and so not to panic if I’m not there not there when she awakes. More likely I’m there to apologize for something I said earlier in impatience or frustration, probably digging in a bit more while I do – no apology at all really – but that’s how these visits are with the two of us.  It’s a lot of guilt on my part, lots of it for good reason, and then recidivism.
When my grandmother turns now to speak to me, I see that she suddenly has no teeth in her mouth.  Her lips have sunken in, like the little knot of someone’s navel, around a maw.
With no teeth, I can clearly make out the skull under Bebe’s soft, wrinkly, beloved cheeks.  I envision the bones that make up her face and the place where her eyes rest in them.  I see that that is, in fact, all the eyes really do there: they rest on top.
The phrase “soft tissue” comes to mind and I understand that phrase now as never before.
I glance at the top nightstand, expecting a set of teeth in a glass, perhaps dancing and yammering in cartoons or commercials, but she must have secreted them away somewhere.  When my ears tune in finally, I have to strain to hear the consonants.  She sees me strain, hears herself and is ashamed to be seen this way.
I close the door behind me. We will not speak of what I saw the next morning, or ever.  When I’m back from my run, I will watch her smooth a marbled green cylinder of Revlon red across her mouth.  She will mug for the mirror, jutting her jaw and stretching her lips wide across the teeth behind them to get her lips taut enough to absorb the pigment, just as I do.
My grandmother and the big sinking house on Village Drive are the most permanent touchstones of my life.  But I know that someday Bebe will die. This will happen after many months where all we have of her is the shell of her former self, but sooner than we am truly prepared.
The day before that happens, I will bitch out my uncle and my little brother, who seem not to care that the caregivers have left Bebe’s nails witchy long, with bits of construction-site orange nail polish inched way up past the tips of her fingers.
While I work on my grandmother’s hands, suffering the stink of acetone as if it were smelling salt, I will raise my voice over her to proclaim that I am the only one who cares about Bebe dying with dignity.

I will be wrong. I will apologize. And I will be forgiven. 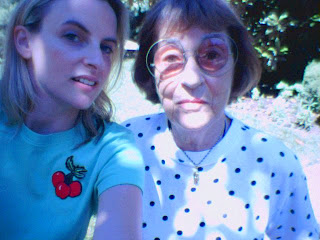